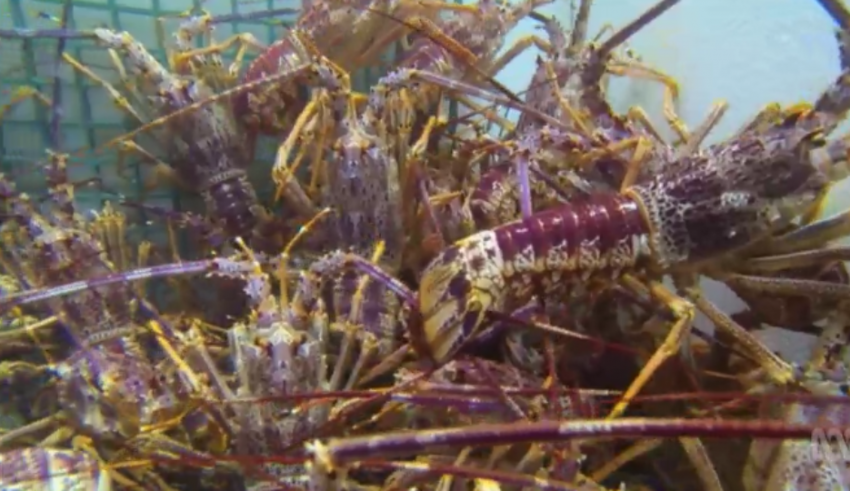 Southern rock lobsters are set to feature on Christmas tables across Australia amid plunging domestic prices fuelled by the nation’s growing trade tensions with China.

With the crustaceans removed from restaurants and markets in China, seafood processors and commercial fishers are hoping the domestic market will provide a critical lifeline to the troubled sector.

Some commercial fishers are now selling the world-renowned delicacy at regional wharfs for $30-$50 per kilogram.

Tasmanian commercial fisher Jason Hart this week sold his catch directly to the public at the Strahan wharf.

“I’ve never had to worry about selling them from the wharf before,” Mr Hart said.

“Even when our markets have been bad you can still on-sell the fish. But I’ve never seen it like this, and I’m a third generation.

“It’s good that people who enjoy them can actually afford a feed, I suppose.

“It’s a bit cheaper, but it’s making things hard for us.”

Mr Hart said while prices were fluctuating it still cost him $30/kg just to run the boat.

With the industry scrambling to find fresh markets during the unprecedented export crisis, South Australian exporter Andrew Ferguson has brokered a landmark deal to supply an Australian supermarket chain with the popular seafood.

“We’ve found a partnership with Drakes and independents in the market to look at distributing frozen or freshly cooked lobsters across the chain of supermarkets,” Mr Ferguson said.

“It is early days, they only made it store on Monday and we’ve already had to send another lot out.”

Mr Ferguson said he wanted to see commercial fishers back out fishing.
“We are looking at the local markets … but it is a difficult process. We’ve got to move on from China and find other opportunities,” he said.

Fleets at a standstill

The fallout from the Chinese trade tensions has seen the largest rock lobster fleet in the Southern Hemisphere come to a standstill along South Australia’s south-eastern coastline.

“This is the biggest crisis I have witnessed in the industry in the past 50 years. We don’t know what’s going to happen,” Mr Cutting said.

“We don’t know if China will come around. It doesn’t look good.”

He said only a handful of the 50-plus commercial boats moored in the Port MacDonnell harbour were fishing and supplying the domestic market.

“The factories tell them where to go and what size to get,” Mr Cutting said.

He warned the domestic demand would taper off after Christmas with more people turning to more affordable seafood choices, such as prawns.

He said the Chinese market was critical for the southern rock lobster industry given its massive population and their “love of lobster”.

The majority of commercial fishers were “sitting around twiddling their thumbs” waiting for some news from China, he said.

“India has a population of 1.4 billion, but they don’t love lobsters. They prefer plain fish.”

Commercial operator Kerry Tatnell, who fished on the west coast of Tasmania but sold at Margate wharf. just south of Hobart, said selling straight to customers was “not the best outcome for the industry”.

“I think we need to look after our own people first instead of overseas markets.

There would probably be a bigger market here if the price was right for our Australian, local, domestic market,” Mr Tatnell said.

He said fishers were struggling to make a profit.

“That’s all we are doing, breaking even. We need to keep working just to try and pay our quota money back, our running costs, and pay our skippers and crew,” Mr Tatnell said.

“We will probably still sell a certain amount of fish to the public here. Without the public I think the whole cray industry would fall over now.”

Tonnes of Australian fresh produce have been held up at Chinese customs in the latest trade war.